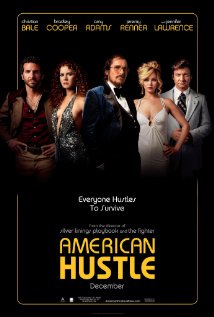 With our New Year’s resolutions freshly spoken and champagne still trickling through our bodies, we capped off our New Year’s Day by going to see American Hustle. If you haven’t seen it, I recommend that you stop reading and go watch it immediately. Because, beyond the fact that it is so good and so uniquely itself, I can think of no more fitting movie to start off a new year, no movie that better embodies the reinvention that all our new year’s resolutions seem to evoke.

I’m not going to give away any of the plot but, as the main character Irv would say, it is a movie directed and acted ‘from the feet up’. A movie that starts with Irv’s grand, bloated belly emerging from his unbuttoned shirt and a meticulous ritual that creates his elaborate comb-over. A comb-over that fools nobody and an appearance so incongruous with the intelligent, deceptive con-man that we are to meet. From the start we know that these are not simple people, these are not even good people, but they are very much raw, alive and fully-realised.

The characters in American Hustle are operatic, almost Shakespearean, and yet they are also immediate and instinctive. They make up stories and con each other as a survival mechanism, and it is their gritty, determined reinvention that makes the film so addictively watchable.

In the words of the film’s director David O Russell, “The currency of humanity is the belief in dreams or narratives.” And it is that idea that makes American Hustle so fitting for the start of the new year. Because whenever we think of all the things that lie ahead of us in 2014 (be it a new job, a new baby, a new project) we have to present them to ourselves in a way that sells them. We have to buy into the narratives that we create for our lives, in order to realise them.

Irv’s motto in the film is that people believe what they want to believe. It is that understanding that makes him the successful hustler he is. And yet, his motto is also relevant when we direct it at our own lives. We believe what we want to believe about ourselves, about our commitments and about our lives. So why not choose to believe that all our hopes and dreams and goals for 2014 are possible and probable?

With that in mind, what narratives are you looking to manifest this year?

2 thoughts on “American Hustle and the art of reinvention”